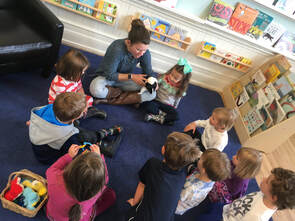 Anne joined the Paddington community in 2015. She is originally from Tucson, Arizona, but is fortunate to have lived and worked in several countries and cultures. After getting her undergraduate degree in Biochemistry from Smith College, she served in the Peace Corps in Africa. After returning from Zaire, she earned a Master’s Degree in teaching English as a Second Language. She then spent several years teaching in a family literacy program, before taking a hiatus to stay home to raise her three children.

To run across the playground with the boy who turns a Hula Hoop into a rocket ship and flies to Mars.
To sing a lullaby to the girl who cuddles her monkey as she falls asleep at naptime.
To buy cookies from the boy who builds a bakery out of blocks.
To watch a group of children with colorful swatches of fabric on their wrists run in a flock, shouting, “Look at us!  We’re exotic birds!”
To comfort the boy who tripped and skinned his knee, rubbing his back as his tears subside.
To eat a birthday cake made of sand as a group of children sing “Happy Birthday.”
To hold a hissing cockroach as the girl dressed in a pink princess dress gently strokes it while observing it through a magnifying glass.
To dance and sing and read and play.
To delight in all the small moments of wonder as children explore the world.