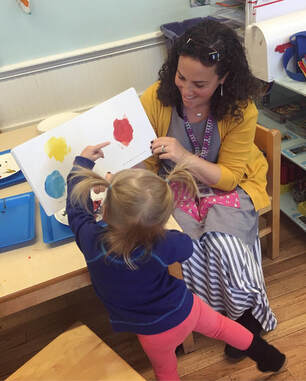 Marti is a parent to two former Paddington students, and she is excited to return to Paddington as a current parent and Benjamin Bunny Teacher. Marti grew up in Denver as a 5th-Generation Coloradoan. She attended Brown University in Providence, Rhode Island where she earned her teaching license alongside a B.A. in Biology. She taught middle and high school science for four years in both Massachusetts and Pennsylvania while also earning her M.A. in Integrated Science Education from the University of Pennsylvania. Marti returned to her home State of Colorado with her husband, Andrew, and her daughter in 2009. Before joining the Paddington Team, Marti enjoyed spending time raising her three children, Gabi, Avi, and Asher, while also building a business, Little Smartist (toddler art enrichment classes). Marti loves spending time with her family outdoors, cooking whole-plant based food (something her husband is passionate about), and crafting of all sorts. She is so excited to join the Paddington community of educators and families.

When I first walked into Paddington, I was on a tour as a prospective parent. I watched as students rolled balls of different sizes and materials down the big hallway ramp. Their excitement as they investigated which rolled fastest was contagious. I knew in that moment that I had found a perfect school for my children — one where they could learn through play.
​
The children I watched were loving learning, and I knew this foundation would lay the groundwork for loving school throughout their lives. Now as a past- parent, current parent, and teacher at Paddington, I do what I do each day to continue fostering that love of learning. At Paddington, the play-based curriculum is intentional. It’s a place where learning is built into every moment, and it’s a place where each child is valued for who they are. I teach (and send my own children to learn) at Paddington because I believe play has the power to develop lifelong learners and productive, kind members of our society.