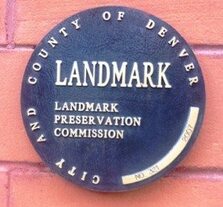 In 1890, School District No. 44, in the town of Montclair, built the Montclair School. The school opened to neighborhood students in January 1891. The building later became known as the Stanley School, after the school children petitioned to have the school renamed after New York Herald journalist and adventurer Henry M. Stanley. Prominent Denver architect, John J. Huddart designed the building in the Romanesque Revival architectural style. This style was representative of many public schools built during the last decade of the nineteenth century. The Romanesque style is characterized by the red brick basket weave designs, stone arches, tall arched windows, dentils and corbelled façade. Another characteristic of this style is the sandstone features including the sills, keystones, and banding.
In the mid 1890’s the Montclair School District No. 44 built a one-story addition on the west side of the original building which contained a gymnasium and what has been considered Denver’s first public Kindergarten. This kindergarten known as the Dudley Denison Memorial kindergarten, was named for the son of John and Agnes Denison. John Denison, an attorney, helped Baron Walter von Richtofen clear the title to the Montclair addition to create the neighborhood and also served as president of the Montclair School Board. He later became presiding judge of the Colorado Supreme Court. John’s wife Agnes Denison actively participated in the Denver Free Kindergarten Association, which was a faction of the Ladies Relief Society.

The first teacher of the Dudley Denison Memorial Kindergarten was Anna Louise Johnson, whom also served as Director of Denver Playgrounds. Montclair families actively supported the school and valued it as an outstanding educational facility. An album of photographs entitled “Some ‘Sketches’ in Blue,” which is preserved at the Western History Collection of the Denver Public Library, documents numerous activities and events of the school in 1897. By 1900, 88 families lived in Montclair, representing all economic classes, with heads of households including professionals such as lawyers, mine owners and business owners, in addition to day laborers, miners, and plumbers. The City of Denver annexed Montclair in 1902, thus making the Stanley School a part of Denver Public Schools. The school district immediately announced plans to change the name back to Montclair School, despite protests from neighborhood families. Although the name reverted back to Montclair School, teachers and families worked to ensure that the neighborhood children received a quality education and the school retained excellent credentials.

The next significant date for the Montclair School was in 1943. Denver Public Schools dedicated a new Montclair elementary school at 11th and Newport. Children who lived east of Quebec and south of Colfax still attended classes at the original Montclair School. High numbers of students at the new school and Ashley Elementary, located at 19th Avenue and Syracuse Street, required the use of the original building for nearly three decades. In the early 1970’s, declining enrollment pushed the school district to begin cutting costs and disposing of old buildings. Denver Public Schools announced plans to demolish the original school in 1973 at which point Historic Denver signed a five-year lease on the building and found a new tenant in 1975. The new tenant was a vocational training facility by the name of Opportunities Industrial Center. This facility used the building until the early 1980’s when the building went unused for a few years.
​
In 1984, the Stanley British Primary School purchased the building from the City of Denver. In order to add additional classrooms, a library, offices and meeting rooms, the school constructed an addition on the west of the original building where the original kindergarten was housed. The design intention of the addition was to unify both old and new structures by accepting geometric proportions established within the design of the original building. Stanley British Primary School soon outgrew the school and began to move to their current Lowry location. In 1993, Paddington Station Preschool began leasing space in the school. Paddington Station continued to grow and lease more space from Stanley British Primary School until it purchased the building in August 2011.
​
The Montclair/Stanley School is located at a prominent intersection of the historic Montclair neighborhood and has always been a well-known landmark. The school has been associated with the early development of the Town of Montclair, and the neighborhood after annexation to Denver in 1902. Except for a few years in the early 1980’s, when the building sat vacant, the building has served the neighborhood as a school since it opened in 1891. In 2007, the Montclair/Stanley School building was designated as a Denver Landmark and was placed on the National Register of Historic Places. In 2007, Paddington Station Preschool began a historic preservation and rehabilitation project with the assistance of funds from the Colorado State Historical Fund. The preservation and restoration to the building included restoration the original wood entry doors and windows to their original condition, a new historically accurate slate roof and a complete restoration and preservation of all masonry, stone and brick. With preservation and restoration complete, this Historic Landmark is poised to continue its mission for many years to come.