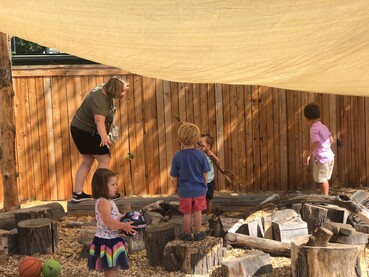 Hanni was a Paddington parent in 2014, 2015 and 2016 before taking on a support position in the School Office in 2017 (when her son entered kindergarten at the Logan School). A Denver native, Hanni left the state during her college years to attend Hobart-William Smith College in upstate New York where she pursued an individual major focusing on sociology, psychology and education. After receiving her Bachelor’s degree, with an emphasis on elementary and special education, she taught third and fourth grade in Denver Public Schools for eight years. In 2020, Hanni returned to the classroom at Paddington and is excited to get to know, teach and play along side our littlest community members.

Education is in my blood. My great-grandfather, grandmother, father and numerous great uncles and cousins all are or have been educators at some point in their careers. I followed suit not because I had to but because I was drawn to education. I desired to open doors in education and encourage learners to reach further than they believed they could.

I graduated college with a Bachelor of Arts: An Interdisciplinary Study of Children as well as receiving my teaching certificates in Elementary Education and Mild/Moderate Special Education. From there, I spent eight wonderful, rewarding and challenging years teaching 3rd, 4thand 5thgrades in Denver Public Schools. I met and worked among many talented colleagues and taught hundreds of incredibly special children. I left the traditional classroom and spent time in South Sudan conducting teacher workshops and homeschooling three preschoolers in Canoa, Ecuador.

In 2012, my proudest accomplishment was becoming a mom. I stayed at home to raise my son and to be as present as I could for him and the many adventures that come with parenting. When it became time for preschool, Paddington Station stood out to as a place my son would thrive and grow. He spent three wonderful years at Paddington in the Squirrel Nutkin, Samuel Whiskers and Jemima Puddleduck classrooms. He played his heart out and grew tremendously.
​
While he transitioned to kindergarten, it was my turn to transition back into the workplace and find a bit of myself again. Paddington Station was a perfect next step. I treasure the community, teachers and families here at Paddington Station and believe the Office Support position allows me to work while supporting my son.