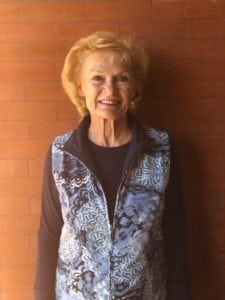 Rosemary grew up in the Bonnie Brae neighborhood, in Denver. Her father was a physician, and her mother was a teacher. She graduated from South High School in 1961 and received her BS in Social Work from Ohio State University in 1965.
After graduation, Rosemary worked for the Franklin County Child Welfare department as a case worker. She married her husband in 1965.
The family moved to Charleston, South Carolina for two years, when her husband was drafted into the navy. They returned to Denver and Rosemary severed as president of the Colorado Interns and Residents Wives Club for four years. In the 1970s, she was the adult guardian of Bethels 15 & 36 of Job’s Daughters. In the 1980s, Rosemary served on the board of Geneva Glenn Children’s Camp. When her two children went away to college, she volunteered as a Hospital Social Worker at the Denver Children’s Hospital. In 1996, their family fulfilled a dream of living five months out of the year for ten years on a sailboat in the British Virgin Islands. During that time, they started a prostate cancer screening process on the islands. Rosemary played an integral part in educating the community about the process. In 2006, they sold the boat and returned to Denver. She and her husband attend Trinity Methodist Church and she volunteers at Metro Caring food bank.

I love this age of children!  They are a fresh slate of information.  I hope to keep the Paddington Station
Board doing what it’s  been doing…..providing a wonderful introduction to education!