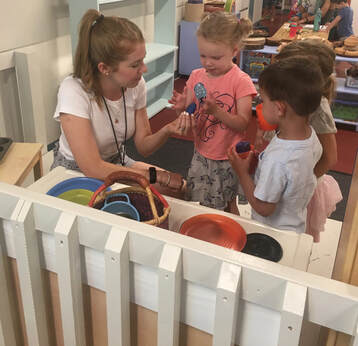 From an early age, Sarah loved being around children! Finally, at the age of 16, Sarah was able to teach summer camp for preschoolers— a job that she held for five summers. However, her love of art pushed her to earn a degree in Art History from Gettysburg College in 2010. After college, Sarah got a job working at Nordstrom in the accessories department but really missed being around children. So she made the move to Jackson Hole, WY where she was the lead teacher in an 18-36 month room. After a wonderful two years there, her family, friends, and her beloved Colorado called her back home. She was thrilled to become a teacher at Paddington Station in 2016.

​Walking into Paddington Station Preschool five and a half years ago on my first day as an intern, I had no idea just how lucky I was. It was a transformative year in many ways, solidifying my educational philosophy and my belief in learning through play.

Now, as a lead teacher at Paddington, each day makes me more of a believer in the extraordinary power of play and its purpose and place in the classroom and in the lives of young children.

I have seen children learn to write their name after tracing shapes in salt trays. I have seen a child finally be able to control scissors after months of squishing gak. I have seen problem-solving as a group tries to figure out who should be the next customer at the restaurant in the dramatic play area. I have seen empathy developing when holding a worm.

I strongly believe that childhood should be celebrated, not hurried, though of course, we all lead hurried lives. At Paddington, days are filled with creativity, curiosity, and exploration. Open-ended play allows for the whole child to be nurtured and to grow at their own pace, setting them up to be confident, empathetic, imaginative, and resilient citizens of the world.

Being a part of a community that shares my beliefs and supports my passion fills me with great joy and gives meaning to
​what I do every day.