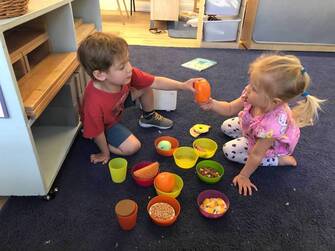 Cooperative play is when children play together and actively take part in the same activity.

​
SOCIAL EMOTIONAL:
Social and emotional development continues to include the identification of emotions and the establishment of peer relationships. Three-year-olds are progressing toward the development of empathy, processing verbal and nonverbal social cues and implementing appropriate conflict resolution skills.


PHYSICAL (Fine Motor and Gross Motor):
Gross Motor: Three-year-olds begin to experiment with more complex movements, such as skipping, hopping on one or two feet, riding tricycles and developing coordination and balance.
Fine Motor: Three-year-olds begin to use scissors to cut paper and other materials. They also begin to use tweezers, build with smaller blocks, Legos and manipulate other small objects.


LANGUAGE:
Three-year-olds begin to use expressive language. They dialogue back and forth with adults and other children and begin to speak in sentences. Three-year-olds are learning new vocabulary daily and try it out in unusual ways. They enjoy rhyming and nonsense words. They love to ask, “why?” 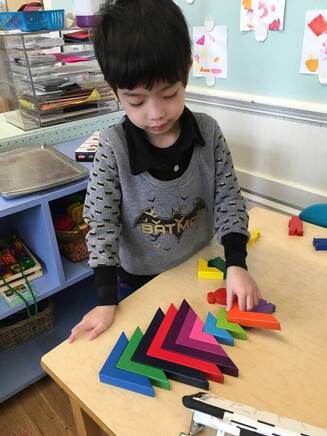 ​COGNITIVE:
Three-year-olds solidify their understanding of colors, shapes, vocabulary, sorting, patterning and number sense. They start to follow multi-step directions and begin to make predictions about text and make text-to-self connections, while listening to books. Three-year-olds wonder as their confidence in asking “why?” and exploring new materials grows daily.


SCIENCE:
Three-year-olds are introduced to the language of the scientific method (words such as “prediction”). Teachers record their observations (eye color, favorite color and favorite apple) and make charts and graphs. Science is hands-on and the exposure to the natural world is extended. They touch worms and wonder what is inside of a pumpkin. 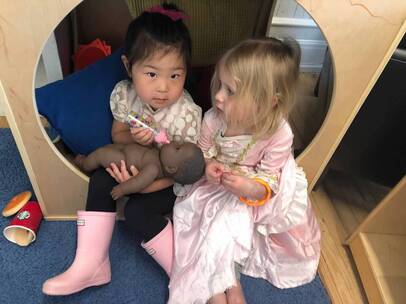 
CREATIVE:
Three-year-olds begin to explore three-dimensional projects, such as building with sugar cubes, recycled items and wood scraps. They begin to understand that glue is used to connect two objects together.