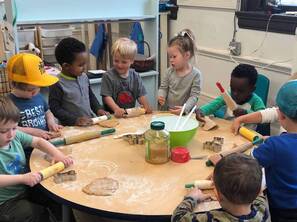 PLAY:
Two-year-olds’ play is parallel, and progressing toward associative play. They begin to play in closer proximity to each other. Two-year-olds watch each other and imitate the actions of their classmates. They build simple block structures and knock them over and enjoy making horizontal structures. Their buildings remain separate from their peers’ buildings.

SOCIAL EMOTIONAL:
Social and emotional development includes learning routines and transitions, separating from caregivers and continuing to establish trust in other adults. Two-year-olds are progressing towards the identification of emotions and the development of peer relationships. They begin to learn appropriate conflict resolution as modeled by an adult. 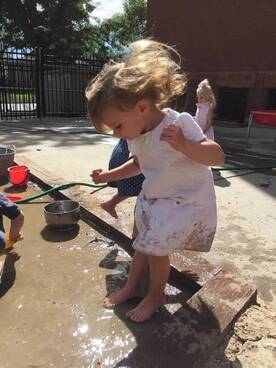 
LANGUAGE:
Language explodes! Teachers model language for children about sharing and conflict resolution is introduced. Two-year-olds are encouraged to speak up for themselves and find their voice. Vocabulary continues to expand and they begin to string together several words.


COGNITIVE:
A two-year-olds’ exposure to colors, shapes, number sense, labeling, vocabulary, songs, rhymes and literature expands and begins to include counting, patterns, predictions, singing and following routines. They begin to follow basic one- and two-step directions. 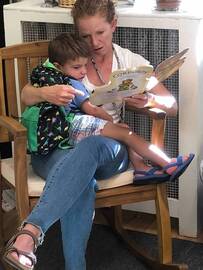 ​LITERACY:
Two-year-olds love books! They will often ask an adult to read them a book and can repeat language from a book and retell parts of the story. Two-year olds pretend to read books to their friends and teachers. They begin to show interest in writing and will start to scribble. And, they begin to attach meaning to their scribbles and might even tell others they have written their name or another word.


MATH:
Two-year-olds love to count everything including their classmates, stairs and teddy bears! Teachers model counting from one to ten. They begin to grasp and identify size differences, such as big and small, short and tall and they begin to understand directions related to position, such as in and out, as well as up and down.

SCIENCE:
Two-year-olds observe and interact with natural objects and the environment. They ask many questions, and start to engage in simple cause-and-effect experiments, such as mixing vinegar and baking soda. 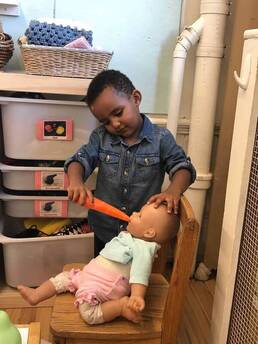 ​
​SOCIAL STUDIES:
Two-year-olds are very focused on “self” and “family”. Their world is small and important. They begin to identify family members and sometimes include the family pets in their descriptions!


CREATIVE:
Two-year-olds love to explore the arts, including the visual arts, music, dance and drama. Open-ended art projects allow two-year-olds to experiment with different materials, with process being more important than product. They learn songs that are often repeated at home, and engage in dance and dramatic play in the classroom, enhanced by props and dress-up clothes.


ENGLISH LANGUAGE ACQUISITION:
Two-year-olds observe others as they speak and begin to echo words and phrases. Teachers model language and expose all children to a language-rich environment. Two-year-olds begin to connect words to real life, and they often imitate adults or other children. Repetitive and rhyming songs, books and nursery rhymes are enjoyed by all.